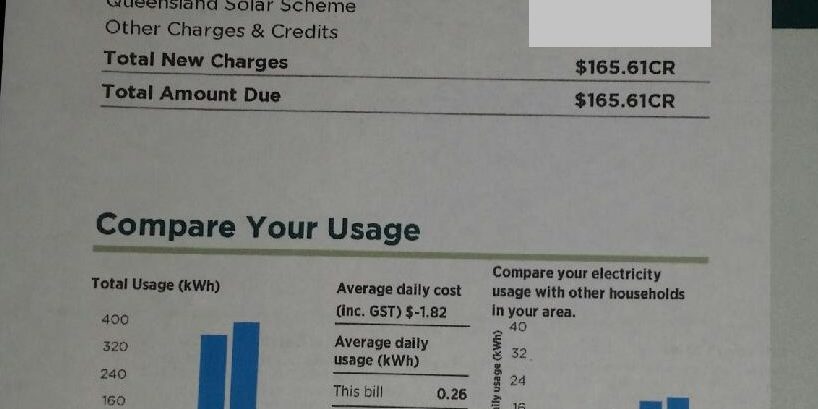 A couple in Hervey Bay had the latest Solar and battery storage system installed to their home recently to help reduce their power bills. The system installed by Ahlec Solar including LG RESU battery storage and a Sungrow Hybrid inverter with emergency power supply. The system incorporates a solar array on the roof that creates the power which is then sent directly to the Hybrid inverter, this power is then sent directly to the battery to store for use later, power electrical items in the home or indeed any surplus is sent off to the grid for a credit.

The entire system including complete installation cost the couple under $17,000 to install however going on the latest bill that they received which was $168.00 in credit, the payback of the system will be way in advance of any projections given. This means that not only did the system allow the couple to continue using their appliances including ducted air conditioning as normal, but it also paid their standard daily electricity charges as well as giving them a credit which is amazing.

The Faulkner’s have taken a huge step in controlling their future electricity expenses and any further electricity price rises that could arise. That combined with no longer being at the mercy of any power outages that can be a regular occurrence has left them smiling all the way to the bank.

LG are a huge South Korean company that have been trading since 1958 and went on to become a household name across the world manufacturing a vast array of electrical products. They manufacture batteries that are used across the industry including Solar storage and Electric vehicles. They are a trusted name who have been at the forefront of Lithium battery development and manufacturing.

If you’d like to learn more about how a credit on your energy bill is possible, contact us today.